She’s Got Game, Too! 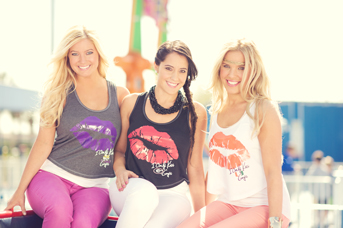 Not long ago, women who wanted to show their loyalty to a college or professional sports team were very limited in their choices when it came to apparel.

“In the past, sporting goods companies manufactured smaller versions of men’s products for women, yet they weren’t made for a woman’s body or personal appeal,” says Tiffany Pearl, founder of Miss Fanatic, a supplier of licensed National Basketball Association (NBA) and collegiate apparel for women. “If you go back years ago, a men’s small-sized T-shirt is what was available to women in sports licensed products.

“Now, you can see hair and nail accessories, swimwear, high-heel shoes, cosmetics and so many more female- driven items,” she says of today’s offerings. “Manufacturers realize the importance of meeting women’s needs and now they develop products and merchandise designed specifically for women.”

NIX NICHE THINKING
Because of a new reverence for the female consumer, the “shrink-it-and-pink-it” philosophy of offering products for this demographic doesn’t cut it in today’s game, says Martin Brochstein, senior vice president of industry relations and information for the International Licensing Industry Merchandisers’ Association (LIMA).

“There are new fashion trends, and sports leagues are developing lines of merchandise aimed specifically at women,” he says. “This is such a significant business that I wouldn’t use the phrase ‘niche’ to describe it, because women are simply a major part of the market.”
Indeed they are, and their market is all about dollars, particularly on the  collegiate side of the business.

“There’s no doubt that women are more invested in sports than at any other time in history and they’re making the purchases to show it,” Pearl says. “The licensed college sports products retail market accounts for $4.6 billion in sales annually. According to an ESPN Sports Poll, 89 million women identify themselves as college sports fans, a number that tops even the NFL, in which 84.3 million women self-identify as fans. Those numbers look pretty good to me.”

According to IMG College, a collegiate sports marketing company that represents more than 200 collegiate properties, including the National Collegiate Athletic Association (NCAA), the women’s apparel retail category has grown by 148% in the last five years and by 53% in the last three years. The boom has been so profound that women’s apparel is now the company’s second-largest apparel category, ranking behind men’s/unisex T-shirts.

“Women’s apparel makes up 18% of our total apparel business and 11% of our total collegiate licensing business, which includes apparel and non-apparel,” says Andrew Giangola, vice president of strategic communications for IMG College. “We estimate women’s apparel retail sales for the CLC collegiate market were in excess of $350 million in fiscal year 2012-13.

“We wouldn’t consider the women’s market a niche,” he continues. “Women are squarely in the mainstream of the collegiate licensed merchandise market.”
Lauren Polt, founder of chicka-d, a manufacturer of women’s and children’s licensed apparel, concurs with the sentiment that the women’s market has grown considerably, especially in the last five years.

“Companies have started catering to what women want to wear, which is not boring T-shirts,” she says. “Women want to look and feel good, even when supporting their teams. Companies are realizing this and catering to the demand.”

Lisa Palmer, co-founder and creative director of Lillybee U, a supplier of women’s footwear that’s available in collegiate colors, says manufacturers have stepped up their collective game, in part, because they now recognize that women are shelling out the money at retail.

“Women are buying for their households, their families, their dorms … they’re the ones throwing the tailgating and the family outings together,” she says. “They’re looking for items that fit their everyday style and that’s been very difficult to find in the collegiate market.

THE RIGHT FIT
Lillybee U launched its line of footwear just last year, after researching the market for several months prior.

“In general, women are looking for products that are more subtle, something other than an item with a huge logo plastered on it,” Palmer says. “Girls are more stylish today, and we didn’t feel there was a true lifestyle brand in the marketplace — something that employed a little more color and sophistication than your average sweatshirt.”
Lillybee U carries footwear for 64 schools and universities, and is a licensed partner with the Collegiate Licensing Co. (CLC) and a member of the National  Association of College Stores.

“We are licensed to use the team’s colors,” Palmer says. “There are a lot of brands that use team colors in their merchandise, but aren’t official licensees. We felt like it was important to do so, even though it’s a very expensive and detailed process. Fans want that correct color.” The company also is licensed to sell products for 19 sororities.
Women consumers also prefer a flattering, comfortable fit, something Miss Fanatic is happy to provide. “Creating the right fit and silhouette for the female fan is the key to success for this segment,” Pearl says. “Multiple brands throughout the market have now shifted focus and launched women’s-inspired collections. One of the top trends is creating team jerseys fit to a woman’s body, as well as other items that still show team spirit — yet in a more fashionable, subtle way.”

At the 2014 Sports Licensing and Tailgate Show, held in Las Vegas, John Sabo, general merchandise manager for Fanatics, one of the largest online retailers of licensed sports products, spoke about changes that have occurred in how industry manufacturers approach the increasingly important women’s demographic.

“Five years ago, if you were to look at the types of women’s products that were offered to the marketplace, they were boring,” he said. “You might have a non- fitting T-shirt with an average graphic on it. There was a lot else going on in the rest of the women’s marketplace that really wasn’t making its mark in the sports licensing world. A lot of companies in this business have done a tremendous job of looking at what translates well — as far as fit, fashion and graphics — and using that to take the women’s business to where it is now.”
Polt says gameday dresses “have been wildly successful for us, especially in the south at SEC and Big 12 schools. This season we’re also seeing a big trend toward lightweight scarves.”

“The female consumer is fashion conscious across all occasions,” Giangola says. “She doesn’t want to wear the same thing over and over … quite a contrast to the T-shirt I’ve proudly worn since the Reagan administration. Whether she’s dressing for a night on the town or a sporting event, uniqueness and variety are important, and for that she’s usually willing to pay a premium price.”

One item to watch for in the fall is the Spirit Jersey. “This is essentially an oversized T-shirt with an institution’s name in large letters across the back of the garment from shoulder blade to shoulder blade,” Giangola says.

NEW TO THE GAME
Even suppliers that haven’t traditionally catered to the women’s sports licensed product market are getting into the act.

“This is a brand new market for us,” says Murray Shabot, president and CEO of World Trade Jewelers, headquartered in New York’s diamond district. Having recently secured a license from the NBA, the company has introduced a new jewelry line featuring logos and designs from all 30 teams.

“The reason we went after this demographic is that we’re targeting the more fashionable female,” Shabot says. “Sports products are usually geared toward men, but when it comes to fashion, there are a lot more options for women than there used to be. A lot of apparel manufacturers are making more fashionable types of product, and we felt there was an open area to do same thing in jewelry.”

The licensing partnership with World Trade Jewelers shows the NBA sees women as a powerful demographic worthy of sharing the proverbial court with men.

“Women are an integral component of our fan base and great consumers of NBA merchandise,” says Lisa Piken Koper, vice president of licensing for the NBA. “Our female fans are stylish and value newness. As such, we continually diversify our women’s offering by adding compelling, trend-right products. World Trade’s fine jewelry will make a great  addition to the assortment.”
Overall, Shabot says, the jewelry industry is struggling and the companies that are weathering the economy are producing unique and proprietary items.

“I’m a huge NBA fan, and I just felt there was an opportunity out there to do something different and set ourselves apart,” he says. “Our company’s biggest success is the Hershey Kiss line, a product that is licensed with Hershey’s. We approached the NBA with the same licensing idea.”

The cosmetics industry also is beginning to offer licensed sports-themed products. “One of the trends we are picking up on is the nail décor trend,” Pearl says. “We just launched our 2014 NBA- and NCAA-inspired nail collection. What is great about items such as nail art, or other accessories, is that you can show a pop of team spirit in a more personal way.”

WINNING SEASONS AHEAD?
With the fan base and its available dollars, the future is bright for the women’s sports licensed product market. However, challenges lie in the number of retailers willing to devote space to products geared toward this important consumer demographic.

“The future of this market depends on the speed at which retailers recognize and invest in various sub-demographics within the female consumer segment,” IMG College’s Giangola says. “Long gone are the days where juniors sizes can be the only option. There are female fans and alumni who fall within the contemporary, missy and plus-size classifications.”
He says sporting goods retailers like Indianapolis-based Lids and Birmingham, Ala.-based Hibbett Sports already have profited from women’s sports apparel sales, as have Minneapolis-based Target; Bradenton, Fla.-based Bealls; and Omaha, Neb.-based Gordmans.

“If [retailers] want their women’s product, like apparel, to sell, leagues and colleges have to understand what drives fashion trends,” Brochstein says. “The head of licensing at Ohio State told me he had some nice women’s apparel, but the problem is that retailers will only carry those items sporadically — usually at the start of the season — and then ignore them the rest of the time.”
While it’s clear that women garner more playing time in the sports licensed product game than just a few pink products, leagues still put strong marketing efforts behind charitable causes that may be near and dear to female consumers’ hearts, such as breast cancer awareness.

“The WNBA has Breast Health Awareness Week during the WNBA season in August,” Koper says. “Since the league’s inception, the WNBA teams and players have supported the campaign by wearing pink uniforms, headbands, wristbands and shooting shirts. Additionally, we have multiple licensees who partner with breast cancer charities and donate a portion of NBA product proceeds to this important cause.”

The bottom line: The female consumer has proven just as powerful as her male counterpart. Product suppliers and retailers must react accordingly with appropriately tailored wares, or risk striking out on profits.

“[Women] yearn to purchase fashionable apparel in their sizes, yet it’s not broadly available,” Pearl says. “Over the next few years, we will likely see more investment in products targeting her and the variety she desires.”