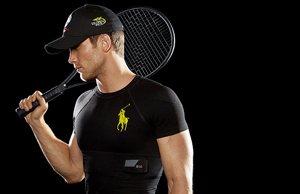 “It’s fascinating to see this guy at the peak of his youth and his health, to watch the stress that he’s under when Roger Federer is handing him a ball,” says David Lauren, executive vice president for advertising, marketing and corporate communications for the Ralph Lauren company. “You can actually see his heart rate spike. You can see his breathing.”

Lauren made the remarks days before the start of the U.S. Open, noting the shirt marks the company’s entry into the world of wearable technology.

“Everyone is exploring wearable tech watches and headbands and looking at cool sneakers,” Lauren said in remarks published by The New York Times. “We skipped to what we thought was new, which is apparel. We live in our clothes.”

The apparel is a form-fitting, black athletic shirt with the Ralph Lauren polo pony emblazoned on the front. It features conductive silver-coated thread woven into the fiber, making it the first tech apparel item to be introduced by a mainstream fashion label, according to the company. The shirt will monitor heart rate, breathing and stress levels, collect that data and display it on a dashboard, smart phone app or computer screen. It’s devoid of straps or ancillary devices.

The shirt is part of the company’s larger initiative to integrate technology into daily wear. In the first half of next year, it also will introduce tech-enhanced classic dress shirts at Ralph Lauren stores. The shirts, which have yet to be priced, will represent a portion of a projected multibillion-dollar business that will include tech products, as well as new collections of contemporary streetwear, according to the company.