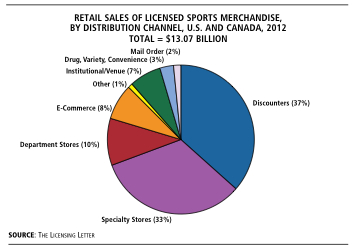 That growth was driven by two of the three largest product categories in sports licensing, Apparel and Accessories, which saw growth of 5.7% and 5.1%, respectively. Together, those two categories accounted for 46.6% of total retail sales of sports-licensed goods in 2012. In addition, Consumer Electronics, a small but vibrant sector, grew 6.8%.

Other sports licensing categories that showed increases in 2012 included Food/Beverage, Footwear, Gifts/Novelties, Health/Beauty, Infant, Sporting Goods, and Toys/Games, all up between 1.8% and 3.5%.

Video Games, which account for 12.6% of the market for sports-based licensed merchandise, declined 5.1%, to $1.65 billion from $1.74 billion the previous year.