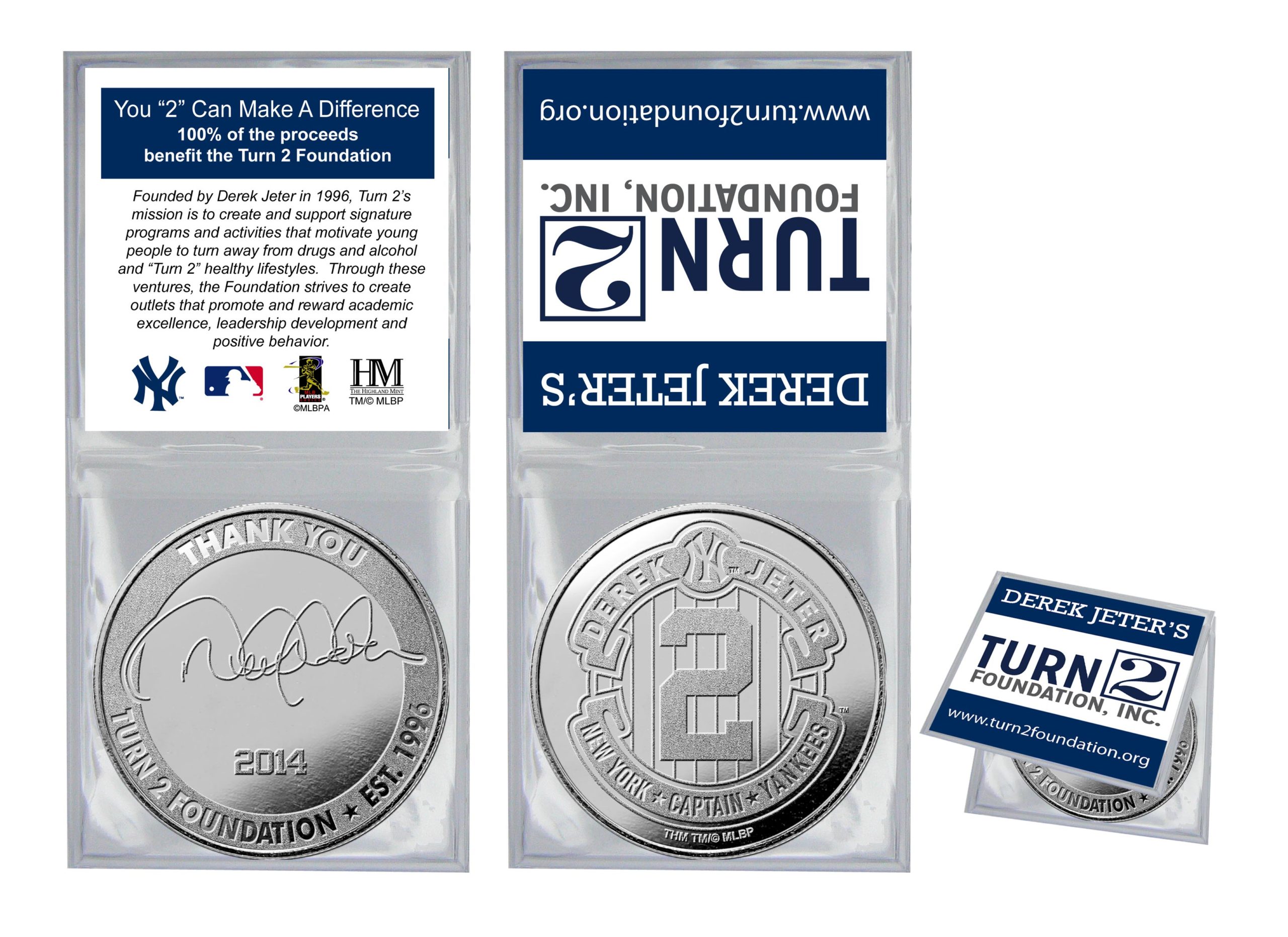 Derek Jeter, Major League Baseball (MLB), the New York Yankees and Highland Mint have teamed up to create a national Derek Jeter Coin Program to celebrate the final season of his 20-year MLB career, it will be announced tonight in a pre-game ceremony at Yankee Stadium. Part of the proceeds from the collection will benefit Jeter’s Turn 2 Foundation, which he launched in his rookie year.

“When I started the Turn 2 Foundation, I could not have imagined it would grow into what it has today, and I am committed to seeing it continue long after my playing career,” said Jeter. “These coins are a great way to not only raise money for the Jeter’s Leaders program, the Foundation’s signature initiative, but also to give something back to the fans for supporting me all these years and into the future.”

Each coin will feature a special retirement badge on one side and a memorable highlight from Jeter’s career on the other.  The first coin released is the Foundation Thank You Coin, featuring Jeter’s signature, and will retail for $2, with 100% of proceeds from the sale of this coin benefitting the Foundation. Fans can purchase the coin at Yankee Stadium, Yankees Clubhouse Shops, online at Jeter’s Final Season Pop-Up Shop (www.finalseasonshop.com) today.  Beginning July 3rd, the coin will be available at tri-state area Modell’s, the exclusive sporting goods retail partner of the coin program.

The collectors coins will continue to roll out during the season, ultimately totaling 10 coins.  Later in the season, a digital campaign will be launched to give fans the opportunity to vote on which of their favorite Jeter moments will be honored on one of the coins. Each coin other than the Foundation Thank You Coin will be available at various price points depending on packaging and display options at the retailers listed above.

The Final Season Pop-Up Shop is a one-stop shop for fans looking to celebrate Jeter’s storied career.  Hosted by the MLB.com Shop, the Derek Jeter Collection includes collectibles, T-shirts, jerseys, and more, all of which feature the specially-created retirement badge.  Additional merchandise offerings will be added as the season progresses.

About the Turn 2 Foundation
Founded by Derek Jeter in 1996, his rookie season with the New York Yankees, the Turn 2 Foundation was established to help youth avoid drug and alcohol addiction and to reward those who showed strong community leadership, high academic achievement and a commitment to living a healthier lifestyle.  At the core of the program are the Jeter’s Leaders, hand-selected high school students who serve as Derek’s ambassadors, mentor younger members of their community and strive to enact positive social change.  As Derek exits the game of baseball, his goal is to continue to expand the Jeter’s Leaders program, so that it thrives long after his retirement.