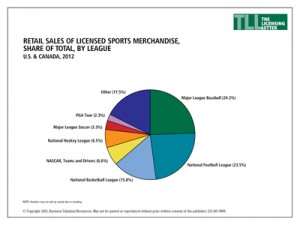 Major League Baseball and the National Football League are locked in a continual playoff for who sells the most retail sales of licensed merchandise annually.

At $3.18 and $3.07 billion, respectively in 2012, according to The Licensing Letter Sports Licensing Report, the two accounted for almost half of the $13.07 billion in retail sales of sports-based merchandise among major leagues and professional sports organizations. That figure was up 2% over 2011.

Collegiate merchandise edged out both MLB and the NFL with $3.38 billion in retail sales of licensed goods last year, bringing the combined market to $16.45 billion.