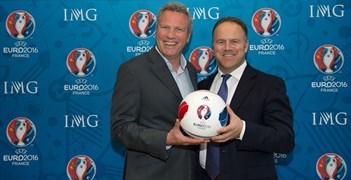 The Union of European Football Associations (UEFA) announced this past May that it has appointed IMG Licensing as its master licensee for its EURO 2016, European Under-21 Championship, European Women’s Championship and Futsal EURO.

The global-rights deal includes national team competitions until 2017, with a primary focus on UEFA EURO 2016 in France.

IMG Licensing will develop a licensing program to reflect UEFA’s growth and appeal to all segments of soccer and sports fans through officially licensed products.

Both core-category and creative licensees will be sought to design, produce and distribute different ranges of fan, lifestyle, fashion and leisure products to be sold throughout Europe and other worldwide markets. Specific retail partnerships also are expected to be confirmed.